Enjoy our city tips, tricks, advice, reviews and full day trip ideas (with kids) for one of our most beloved cities.

Living just 35 minutes from this incredible city can sometimes feel daunting…what should we do this time?  I would love to go BACK to the DeYoung, but shouldn’t we explore something new?  Little Italy?  Chinatown?  Golden Gate Park?  There truly are too many options.  This day is planned around an international theme, trying to indulge in cultural appreciation and cuisine, as well as exlploring some of “The City”‘s much sought after views and sites.  Let’s dive right in.

Our morning in San Francisco begins at Pier 39.  The best time to visit this well loved and oft traveled point of interest is the morning, as you might be some of the first few spectators for the lovely Sea Lions who have called Pier 39 home for more than 20 years!  An excerpt from http://www.pier39.com/home/the-sea-lion-story/  :

A few California sea lions began “hauling out” on PIER 39′s K-Dock shortly after the Loma Prieta earthquake hit San Francisco in October 1989. By January 1990, the boisterous barking pinnipeds started to arrive in droves and completely took over K-Dock, much to the exasperation of PIER 39′s Marina tenants. The Marina Staff turned to The Marine Mammal Center, an organization devoted to the rescue and rehabilitation of marine mammals, for advice about their new slippery tenants. After much debate and research, the experts from The Marine Mammal Center recommended that the sea lions stay in their newfound home.

With a plentiful supply of food from the Bay and an environment protected from predators, the PIER 39 Marina proved to be an ideal living situation for the sea lions. Within a few short months, the number of sea lions grew to more than 300 and hit an all-time record of 1,701 in November 2009. 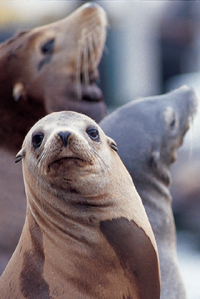 After visiting the noisy residents and barking conversations to them (am I the only one that does this??), it is time to grab a cup of coffee from the Biscoff Coffee Corner to start your day.    A Short walk over to Musee Mecanique, where antique arcade games have been restored to their original glory inhabit a large warehouse space.  Bring your quarters as both adults and children can get lost back in time playing these treasures. 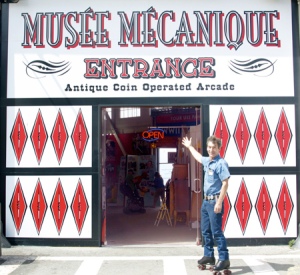 After you have spent all of your singles and the kids have had some entertainment, hop in the car and head up to Chinatown.  Chinatown is quite an experience. I remember as a child the smells coming from Chinatown could be enjoyed from blocks away.  The main street in Chinatown is Bush Street and the official entrance lies on the corner of Bush and Grant.  Walking up and down this district you will find meat markets, produce stands, traditional food stands, souvenier shops, clothing stores and so much more!  A favorite souvenier shop is Shanhgai Bazaar and favorite restaurant is Hunan Homes, do not leave without ordering the green beans!

Now that you have had a little taste of the cultural meld that is San Francisco, hop in the car and head over to Golden Gate Park.  The Koret Children’s Quarter is an incredible playground that has climbing structures, a cement “slide”, a playground for younger ones and quite an expanse of grassy areas for running around aka chasing your toddler.   Also housed at Koret is one of three historic carousels.   Info provided by: http://sfrecpark.org/destination/golden-gate-park/koret-childrens-quarter/ 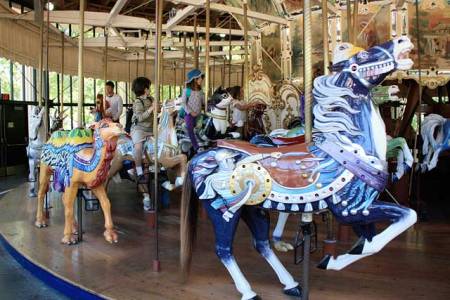 Three carousels have been housed in Golden Gate Park near the Koret Children’s Quarter since the playground opened. The current carousel was built in 1914 by the Herschell-Spillman Company and operated at amusement parks in Los Angeles and Portland, Oregon, before it was installed in Golden Gate Park in 1940 after a stint at the World’s Fair on Treasure Island. It was shut down in 1977 and restored, reopening in 1984. The carousel’s 62 colorfully painted menagerie animals include a dragon, camel, and goat as well as horses, frogs, dogs, roosters, and pigs. Painted panels inside the carousel depict Bay Area landscapes.

After your fill of play, walk on over to the DeYoung Museum, also located in Golden Gate Park.  It is a short walk from Koret’s.  Here you can truly indulge in some world class art.  Even if you don’t stay long, it will certainly either supplement or begin your child’s foray into the arts.  The DeYoung is listed in Parents Magazine’s Top 10 Art Museums for Kids article.  Information taken from http://www.parents.com/fun/vacation/us-destinations/the-10-best-art-museums-for-kids/?page=5

The interactive multimedia exhibit in the Kimball Education Gallery, which focuses on pre-Hispanic art, traditional African art, and 20th- century American painting. Kids can learn Mayan hieroglyphs or color an image of a Mayan stone.  In addition to conveniences such as family bathrooms and a cafe featuring organic food, the museum offers kids activities such as after-school art classes, theater performances, and stories read by docents. More than 1,000 school classes are expected to visit the museum this year. Considered a national leader in art education, the De Young recently published Get Smart With Art, six curriculum guides in social studies, visual arts, and language arts for students in grades 4 to 8. It has also received a President’s Council on Arts and the Humanities award for its Museum Ambassador program, which educates low-income high school students in art and trains them to teach school-age children.

Ok, you could easily end your day right now with a pizza in the hotel room, I know, but why skip out on an authentic Italian dining experience in North Beach, aka Little Italy.  Piazza Pellegrini’s is a delicious, authentic and quaint restaurant located on 659 Columbus Ave in the heart of North Beach.  Their Gnocchi is divine and we split a pizza and salad between the kids.  Food portions are generous and everything is delicious!  There are also a number of gelato shops, all of which are good!  We haven’t had a bad experience yet with gelato. 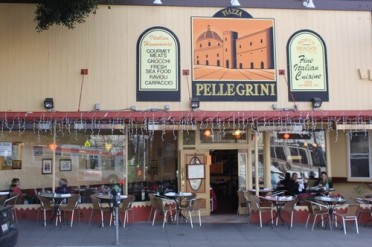 On your drive back to your hotel, or out of town, make sure to stop and take a cruise down historic Lombard Street, known falsely as the “crookedest street in the world.”  There might be a line of cars, but trust me the views make it well worth the wait! 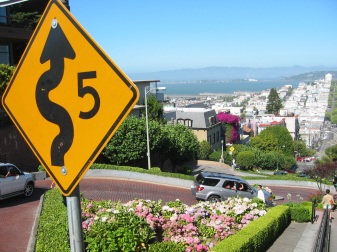 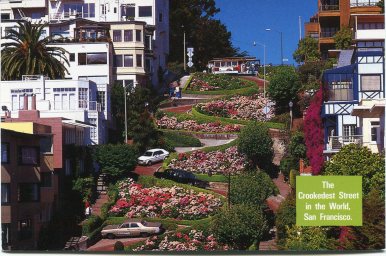 Some interesting facts provided by  http://www.sftodo.com/lomabardcrookedstreet.html

The portion of Lombard Street that everyone knows from the postcards is a section that has been dubbed “the crookedest street in the world”. This refers to the windy switchbacks of road that grace the block between Hyde and Jones. The curvy nature of the one-way drive along with the steep slope of these blocks makes for a fun ride that’s also a visual treat. In total you’ll count eight tight turns in the one block portion of street here.

But did you know that Lombard isn’t truly the “crookedest” street in the world? In fact, it’s not even the crookedest street in San Francisco. That honor belongs to Vermont Street between 20th and 22nd streets in the Portrero Hill neighborhood. Though technically slightly curvier than Lombard, and an interesting sight in its own right, this street doesn’t have the fame or the visual beauty that Lombard Street has, which is why people flock to Lombard Street to take photos during their visit.

You can pat yourself on the back, as you have survived your first CoolKid Globetrotter experience.  Come back to see what we have on the agenda in our next city.

Founder of CoolKid Enterprises, an experiential inspiration specializing in enriching families through exploration of our world: including but not limited to cuisine, product research,creating new traditions, exploring old ones, getting lost in the city, giving back, and truly the sharing of stories and advice. We want to become in tune with our local communities but also pulled to connect worldwide. This is a place where all are welcome, everyone can be a CoolKid.
Loading Comments...
%d bloggers like this: